"You either get housed and take your medications, or you die." That is the chilling reality facing many people living with HIV and AIDS who struggle to find stable housing. Those are the words of James Macht, a man experiencing homelessness living with AIDS who was interviewed by The Oregonian in November.

HIV is a lifelong disease that is manageable by taking daily medication. This medication enables people with HIV to live long lives without symptoms and makes them less likely to transmit the disease to others. For many, this can be a fairly manageable regimen, but for those experiencing homelessness or who lack stable housing, it can prove difficult - if not impossible.

"It’s actually quite simple; if you don’t have housing, how can you take care of yourself?" Dr. George Mugoya noted in a Robert Wood Johnson Foundation blog post. Supporting this simple observation is a robust body of academic research that shows stable housing improves health outcomes by enabling people to consistently take their medication and attend medical appointments. A home enables people to seek and maintain the care they need and build a positive network of support.

In the 1980s, activists and non-profit organizations recognized that stable housing is essential to people living with HIV/AIDS, and in 1990 the U.S. Congress allocated millions of dollars to the Housing Opportunities for Persons with AIDS (HOPWA) program. HOPWA has helped tens of thousands of people living with HIV/AIDS find a home, but many still struggle to find and maintain stable housing.

In 2014, the National Low Income Housing Coalition cited that 65 percent of people living with HIV/AIDS reported stable housing as a "tremendous need." This challenge is getting renewed attention on the West Coast, where public health officials are responding to recent outbreaks of HIV among people without stable housing and people who inject drugs. The number of new cases of HIV in Multnomah County, Oregon, for example, has tripled in the last two years. The Oregonion has reported on how, "public health officials have had to start envisioning their work as tied to the homeless services system, actively canvassing camps to seek out those who are sick."

Further north, officials in King County/Seattle, Washington identified a  new cluster case of HIV among people experiencing homelessness in 2018. The King County Department of Public Health reported: "We estimate that 12% of King County residents diagnosed with HIV (about 829 people) were homeless in the past year. Homelessness among PLWH [people living with HIV] is a critical problem in King County and an important barrier to ensuring that all HIV-infected persons successfully receive life-saving HIV treatment."

In San Francisco, the Department of Public Health reported that as of last year: "The number and proportion of persons homeless at diagnosis has continued to rise; there were 40 (20%) new diagnoses in 2018 compared to 25 (11%) in 2016." There is good news: San Francisco reported the fewest new cases of HIV in 2018 than it has seen in decades, and new cases have fallen 52% in the last five years. In many ways, it’s a testament to decades of work by activists and public health officials, but it also highlights new challenges and growing inequities. People experiencing homelessness make up less than 1% of the population of San Francisco, but accounted for 20% of new cases of HIV in 2018.

Homelessness not only puts people at risk of new HIV infection, but also makes it more difficult to connect them with the care they would need to survive. Data from the San Francisco Department of Public Health shows that people who are housed are more likely to be linked to care within 1 month of diagnosis, more likely to be retained in care 3-9 months after linkage, and more likely to be virally suppressed within 12 months. 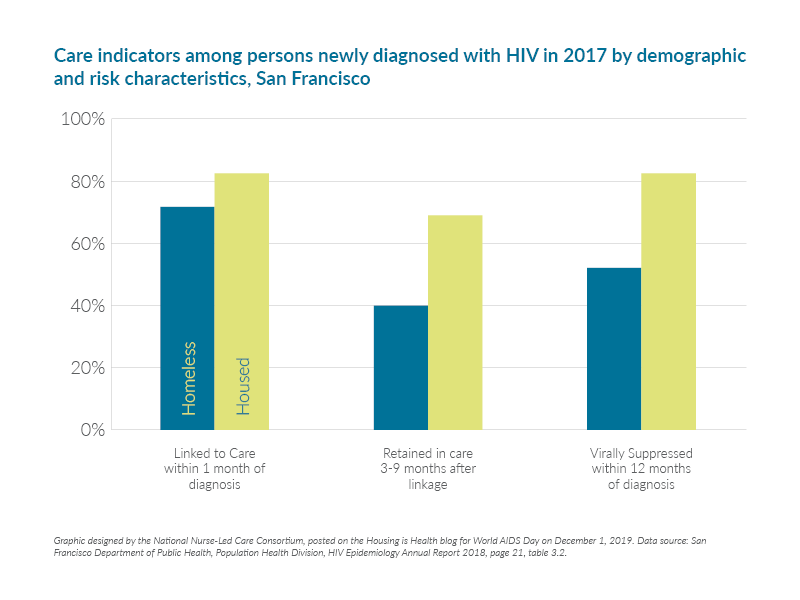 San Francisco is also grappling with an aging population of people who never planned on living. An HIV diagnosis could have been a death sentence before effective treatment became available in 1996. In November 2018, Dr. Diane Havlir and Dr. Joe Hollendoner wrote in the San Francisco Chronicle: "Older adults living with HIV, who make up 65 percent of HIV-positive San Franciscans, are experiencing increasing housing instability due to declining incomes and skyrocketing rental costs."

We have made great strides in effectively preventing and treating HIV/AIDS, but the consistent lack of affordable housing in many American cities is a barrier that must be acknowledged and addressed to eradicate this disease. As we reflect for World AIDS Day on our progress in fighting this epidemic, let’s remember that there is no roadmap to "zero" without first ensuring people with HIV and AIDS have a stable home.

Read more Housing is Health
back to top