Last year, the Joint Center for Housing Studies of Harvard University (JCHS) reported that housing costs are rising across the country, and that rents are rising at twice the rate of overall inflation. “The State of the Nation’s Housing” details the financial weight on cost-burdened families, which are defined as “families who pay more than 30 percent of their income on housing.” This describes 47.4% of renter households as of 2017 and includes 83% of renter households with incomes under $15,000 (72% that spent more than half of their income on housing). Minority households feel the financial squeeze even more when compared to white households, as black and Hispanic renters are the most cost burdened (at 54.9% and 53.5% respectively) compared to 42.6% for white renters. Although public housing should make housing more affordable, the research shows that not only are residents of public housing not immune to the cost-burden of housing, they are often hit the hardest by rising rents and stagnant pay. 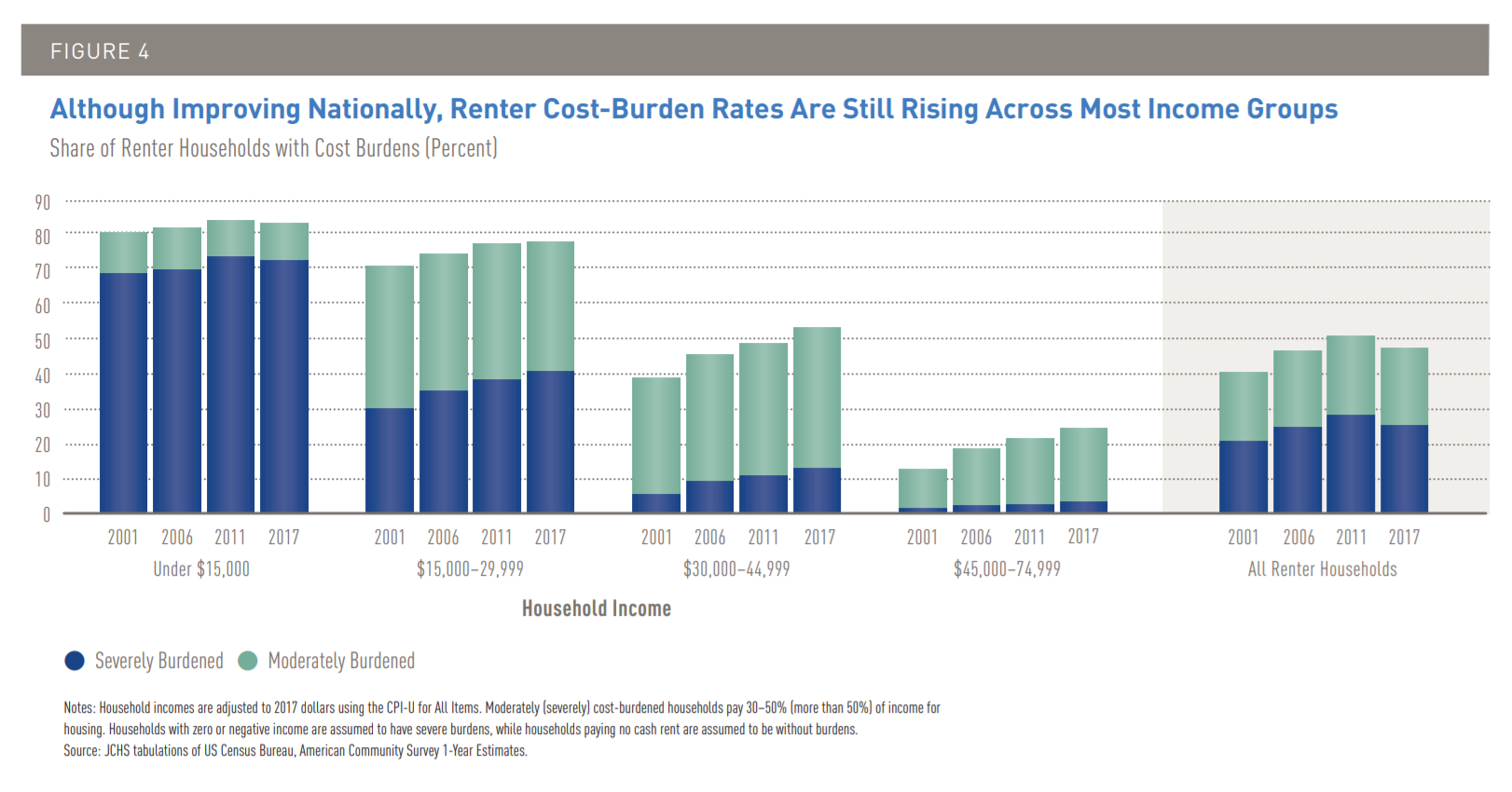 Advocates and lawmakers across the country are crafting innovative solutions to address housing affordability. In Chicago, local officials created a low-income housing trust fund to assist residents living below the poverty line. This rental subsidy program allows for landlords to allocate affordable housing units to low-income residents through a yearly, renewable grant. Philadelphia aims to pilot a new rent voucher program to supplement existing public programs (i.e. Low-Income Housing Tax Credit), which will provide additional monthly rent vouchers of up to $300 to the neediest families. There are some existing policies and initiatives (i.e. housing affordability ballot measures across the country, Wells Fargo Foundation and increased renter-owned repair programs) that aim to address the problems cost-burdened residents, but new and expansive programs are needed to actualize lasting change.

The rate of “billion-dollar disasters” (disasters “where the overall damage costs reached or exceeded $1 billion”) in the United States  . The rise in the number of catastrophic disasters exacerbates America’s  This trend has serious ramifications for public housing authorities and the residents they serve. As we discussed in “Five Things You Need to Know About Climate Change and Public Housing,” natural disasters not only displace residents and their families, but can also damage or destroy already scarce affordable housing units in disaster-prone areas. While the U.S. Department of Housing and Urban Development provides some assistance and resources for communities experiencing disasters, many housing authorities (and, by extension, residents of public housing) struggle to recover not only in the immediate aftermath, but in the months and years that follow.

Severe weather events can deplete a family’s resources (from temporary or permanent loss of income to displacement costs), and disasters may also render some units uninhabitable, especially those already in disrepair. Yet several communities have demonstrated innovative solutions to preparing for natural disasters that may mitigate the worst effects, from retrofitting buildings to creating green jobs to combat the climate crisis. Public housing administrators and advocates must work collaboratively with residents and the communities they serve to build capacity in both preparedness and response, especially in light of the unabated climb in natural disaster incidence and severity.

There is a growing backlog of necessary repairs and renovations for existing public housing stock across the U.S.  Public housing authorities approximate the necessary total capital to complete these repairs to be upwards of $70 billion. As public housing units continue to deteriorate and become unusable, some public housing authorities are looking to the private sector to help solve this problem. Mixed finance housing is an alternative to traditional public housing that allows for partnership between the public and private sector in an effort to provide adequate living spaces for low-income residents. Though there are laws still on the books that prohibit new public housing from potentially being built, this method of rebuilding, retrofitting and/or renovating existing public housing stock allows for low-income individuals to have a place to call home. Although there is skepticism about the effectiveness of this model, this is a trend we expect to see increasingly for the foreseeable future given the realities of the growing need for repair and limitations on public financing.

Although hundreds of thousands of families face eviction every year, there is little national data on the eviction crisis, and few federal resources for families affected by eviction. A proposed solution to this problem is Senate Bill 3030, the Eviction Crisis Act, which was introduced in December 2019 by Senator Michael Bennet of Colorado, and has bi-partisan support. The aim of the bill is to provide resources for tenants and families experiencing housing instability right now, while also creating infrastructure to track eviction data, allowing researchers to identify trends and propose long-term solutions.

S. 3030 allocates funding for Landlord-Tenant community courts, which would divert eviction disputes from the judicial system and into the hands of social service providers. The bill would also establish a National Database of Evictions, which would track attempted and successful evictions, demographics of those affected by eviction, the presence of legal representation on behalf of tenants or landlords, costs associated with eviction, and other factors to create a clearer national picture of the scope of the eviction crisis. The Eviction Crisis Act would also create a Committee on Eviction Research to analyze this data and propose innovative solutions.

The lack of a financial safety net for many families in the U.S. means that a large portion of the population is one small emergency away from serious impacts on their livelihood. Understanding that small unexpected expenses can lead to destabilizing, costly evictions, S. 3030 also establishes an Emergency Assistance Fund grant program. The program would provide small assistance funds to low income families experiencing a crisis or unexpected expense that may otherwise lead to eviction.

The National Nurse-Led Care Consortium joined Opportunity Starts at Home campaign in 2019 in support of S. 3030, and we hope Congress will pass this important legislation this year.

To many, the “single-family home” zoning designation may feel like an innocuous footnote to the housing affordability crisis around the country, but this sentiment is starting to change. Lawmakers throughout the nation are beginning to bring America’s history of inequality and segregation to the forefront as they seek solutions for a path forward. “The historic use of single-family zoning has segregated our cities by race and now is doing so by income. And the correlation between race and income is deep,” said Pam Phan, Community Alliance of Tenants. Cities like Minneapolis recognized this reality and recently passed landmark legislation to become the first large American city to eliminate single-family home zoning. Neighborhoods will no longer be restricted to the single-family home designation, so structures with up to three units (i.e. duplexes/triplexes) can now be built throughout the city. The thinking behind this is two-fold; this legislation attempts to tackle the discriminatory history of “state-sponsored segregation,” and aims to increase the number of affordable housing units in high opportunity areas (i.e. increased access to transportation, grocery stores/fresh food, quality education, etc.).

Seattle has its own plan to combat exclusionary zoning, detailing that zoning policies allowing for increased density is a great start but this form of “upzoning” needs to also include developer incentives to promote the growth of affordable housing in the areas that need it most. Recently, some presidential candidates introduced plans that will incentivize zoning reform to promote higher density housing options in cities. The New York Times recently reported that 75% of residential areas in the U.S. continue to be exclusively zoned for single-family homes.  So, it’s clear that the demand for affordable housing supersedes the supply in many places throughout the country. These proposals will potentially allow for low-income individuals to take advantage of the resources they haven’t had access to for generations. We expect to see more municipalities taking a closer look at zoning practices and incentivizing affordable housing and healthy communities through this important and often overlooked reform.